It is very often the stumbling block for many of the celebrity dancers on Strictly, it’s fun and sassy and requires a lot of technical precision … what is it all about? Let’s have a closer look at this fabulous Latin Dance…

The Cha Cha has its origins in Cuba, it evolved from the slow mambo, originally called the triple mambo. Enrique Jorrin, a Cuban Violinist created the first Cha Cha song in 1948. The name of the dance stems from the sound that dancers feet make to the rhythm of the music.

In the early 1950s, an English dance teacher Pierre Lavelle saw dancers performing this triple step to slow mambo and rumba music. He brought the idea back with him to Britain and taught it as a unique dance that would develop and become the Ballroom ChaCha we now know.

It was introduced to the United States in 1954 and quickly became the latest craze, pushing the Mambo aside. It has never gone out of style and to this day.

Technically it requires great attention to detail of the leg, the foot, rhythm and use of the hips.

The straightened front leg is a must in this dance, the foot is slightly turned out and the counting is 4 and 1 2 3. Great hip action comes from the use of the knees – bending and straightening to release the movement. 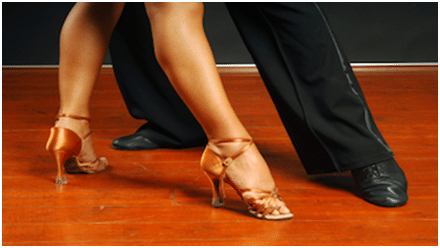 It’s fun, it’s flirtatious and open to a range of personal interpretations, costumes are bright and often have fringing to accentuate the hip action. 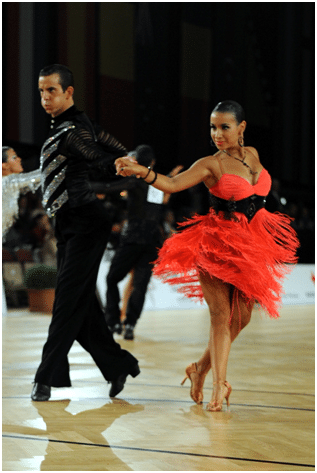 Modern music can be used to great effect and there are so many Latin style songs that have the Cha Cha influence. It has a sense of freedom and fun and is hugely popular when taught in classes, it really is the perfect dance for both social and competitive ballroom dancers.

So yeah it is technically demanding but we love to watch it and we love even more to dance it! It’s great to find out a little more about this Latin dance, in the next blog we will be sweeping around the Ballroom learning all about the quick step!