Possibly one of the single most influential reasons for the revival and the growth of Ballroom and Latin dance in the last 17 years (and in the 42 years before that too !) has been the incredible Strictly Come Dancing on television.

It is not a new concept by any means and has a long history stretching back to 1950. Over the next few blogs, I will be uncovering the history and the magic that made this television series the phenomena it is today, looking at the dancers, the judges, the music and the glitz. I will be taking you through…

So let’s start the journey with… Where it all began. 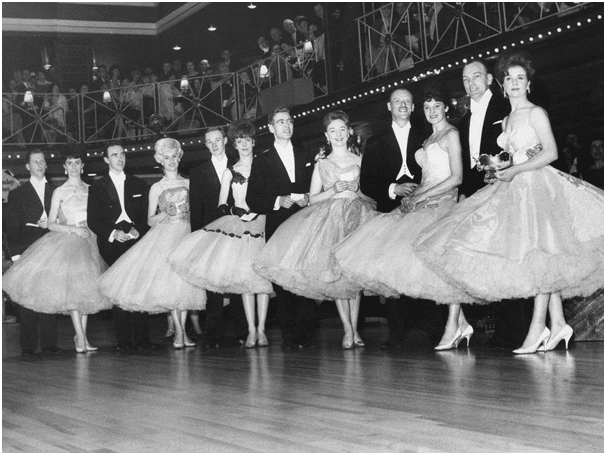 Come Dancing, a ballroom show broadcasting the live final of the British Formation Dancing Trophy was shown in September 1950. This continued to be shown and gradually become known for its commentary and the costumes. These were usually handmade with the hundreds of sequins sewn on by relatives or friends of the dancers. In the 50s broadcasting was still in black and white and so the true glamour of the costumes was not seen by the viewers at home. One of the most popular styles at the time was the puffball dresses which used yards and yards of tulle (Net fabric) gathered to make huge skirts. 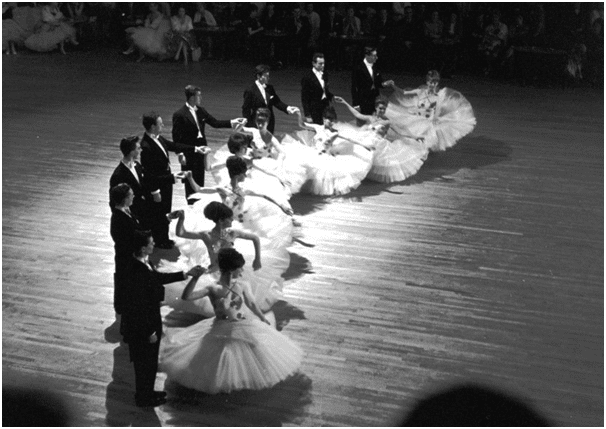 In addition to the partner dancers, the hugely popular formation dances were featured. This was where teams of dance partners all danced together to form cleverly choreographed patterns across the floor, they moved simultaneously and the visual appeal of this was huge, the winners were the ones with perfect timing and synchronicity.

The show was also educational in that it had leading dancers of the day instructing viewers on the steps of some of the dances so you could join in at home too.

This concept was unlike the current Strictly we know as it was simply a televised show of a Ballroom dance competition. It was also only purely professional dancers participating from across Britain and held and filmed at the Lyceum Ballroom in London. The show continued through the 60s and 70s (then famously hosted by Terry Wogan) 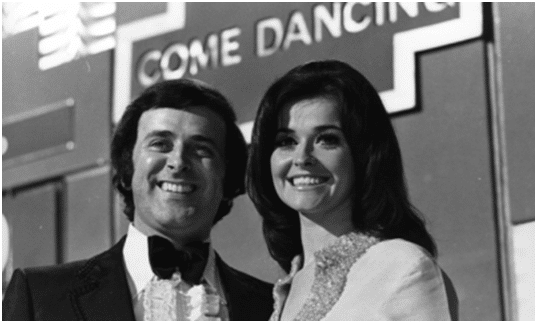 The show moved with the times introducing dances of the day including the jive and even disco in the 70s. The format by this time was now obviously in colour so the full extent of the glamorous costumes could be seen and the more flamboyant the better. In earlier years the costumes whilst eye-catching and glamorous had always been quite traditional. By the 80s they were becoming far more risqué with the introduction of the Latin dances and often had more spangle than fabric! The ballroom costumes remained fairly traditional.

The series became a staple part of viewing in Britain that had been watched by generations in the family. The presenters changed but the guarantee of entertainment and glamour did not.

As tastes and viewpoints slowly began to shift Come Dancing slowed in popularity until the final episode was shown in 1998.

Fear not dancers…there were already ideas forming and a film called Strictly Ballroom was to inspire a concept that couldn’t be better.

Sign up for 8 weeks of free ballroom dance training today