The History of Ballroom Dancing – Ultra Ballroom Skip to content

The History of Ballroom Dancing

So… there you are sitting down watching Strictly…the dancers look amazing the music has your feet tapping and you can totally imagine yourself there…the sequins, the costumes, the amazing partner and definitely the fake tan! As you are watching and being transported to the magical world of ballroom dancing suddenly your mind is filled with so many questions….

The questions just keep coming… well there is great news, here on the Ultra Ballroom Blog I am going to try and answer some of those questions, not just those but many more. I am going to take you through a short history of how many of the ballroom and Latin dances began, give you an insight into the most popular dances, what the difference is between social and ballroom dance and so much more. I will also introduce you to how you can learn to ballroom dance for free and raise money for Cancer Research UK at the same time…it couldn’t get better!

What is the History of Ballroom dance?

It’s possibly your first question as you are watching the amazing technique and the fabulous style of the dancers and wondering how it all began.

Ballroom dance began centuries ago in the courts of the royal palaces, at that time these dances were exclusively for the upper classes, everyone else had to do with folk dances that took place on the village greens or in barns and outhouses. Dances in the palaces were elaborate affairs with an orchestra and huge attention to outfits and makeup(much like today but the style is very different). Because of the fashion of those days, enormous skirts with hoops and padding, close contact with your partner was impossible and frowned upon. Dances were very sedate and far from the current dances of today – the minuet(not a current ballroom dance) was the first dance that began the journey, you faced your partner or held hands and moved on to the next partner as you progressed around the room.

In the early 1800s, the waltz first came to Britain – it caused a scandal and a lot of resistance because of the need to be close to your dance partner. It was hugely popular in Vienna where today we still see the wonderful balls at new year with couples dancing the Viennese waltz.

Dances with partners began their steady rise in popularity just before the first world war, by the 20s people were enjoying more freedom and that was reflected in their clothing – shorter skirts and looser flapper styles became popular and so did the ability to move around the dance floor with the Charleston becoming the dance of the 20s. 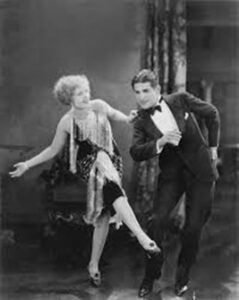 Tea dances became hugely popular in the hotels, seaside resorts of Blackpool and Brighton and Covent Garden in London. The combination of afternoon tea and dance was appealing to everyone. Tango teas were also popular, the tango which had started in the back streets of Buenos Aries, Argentina had emerged in Britain years before the first World War but was making revised popularity.

The 30s became the Hollywood era and a time when the mass audience could see the beauty of what is more closely the dances we see today. Fred Astaire and Ginger Rogers dancing the waltz, quickstep and foxtrot are an inspiration back then as they are now.  Everyone craved the Hollywood glamour and the desire to be swept across the dance floor. Routines from the films of this era are seen now recreated on Strictly Come Dancing, Top Hat, Singing in the Rain and so many more …the imagination had been captured and the world wanted to dance.

In Britain, Victor Sylvester – the man credited with bringing ballroom to the masses and creating the steps and technique of modern-day ballroom was winning competitions and setting up dance classes. In 1939 he was giving ballroom dances, on the radio! You could also buy his records and learn in the comfort of your own home.

Well, the rest, as they say, is history. On television the first ballroom series “Come Dancing” started in 1949 till 1998 – it was hugely popular and famous for the puffball dresses and the sequence dances where teams of couples danced in synchronised choreography.

In 2004 the first series of ‘Strictly Come Dancing ‘ hit our screens. The interest and new found love for Ballroom and Latin dance has never been more popular – the final is usually watched by over 11 million viewers and the show is created in different forms all across the globe.

Who wouldn’t want to be a part of the glitz, glamour, sparkle and excitement of an event that is just like appearing on Strictly? The chance to have free training for 8 weeks, dance at an amazing venue, hear your friends and relatives shout and cheer for you, get dressed up and feel FAB U LOUS ? On top of all that you could raise money that will support vital research for Cancer Research UK. Ultra Ballroom can make all that come true.

Sign up today for more details about your free training

2 thoughts on “The History of Ballroom Dancing”