What Are The Different Types of Latin Dances? – Ultra Ballroom Skip to content

What Are The Different Types of Latin Dances?

Home » Blog » General » What Are The Different Types of Latin Dances?

So we have talked about the Ballroom dances in our previous post and of course, we can’t leave out the Latin. On the opposite side of the dance spectrum, the Latin is vivacious, sparkling and with very particular styles and techniques. The costumes are dramatic and more daring (there will be a post going into more details about costume coming soon).

The main Latin dances are: 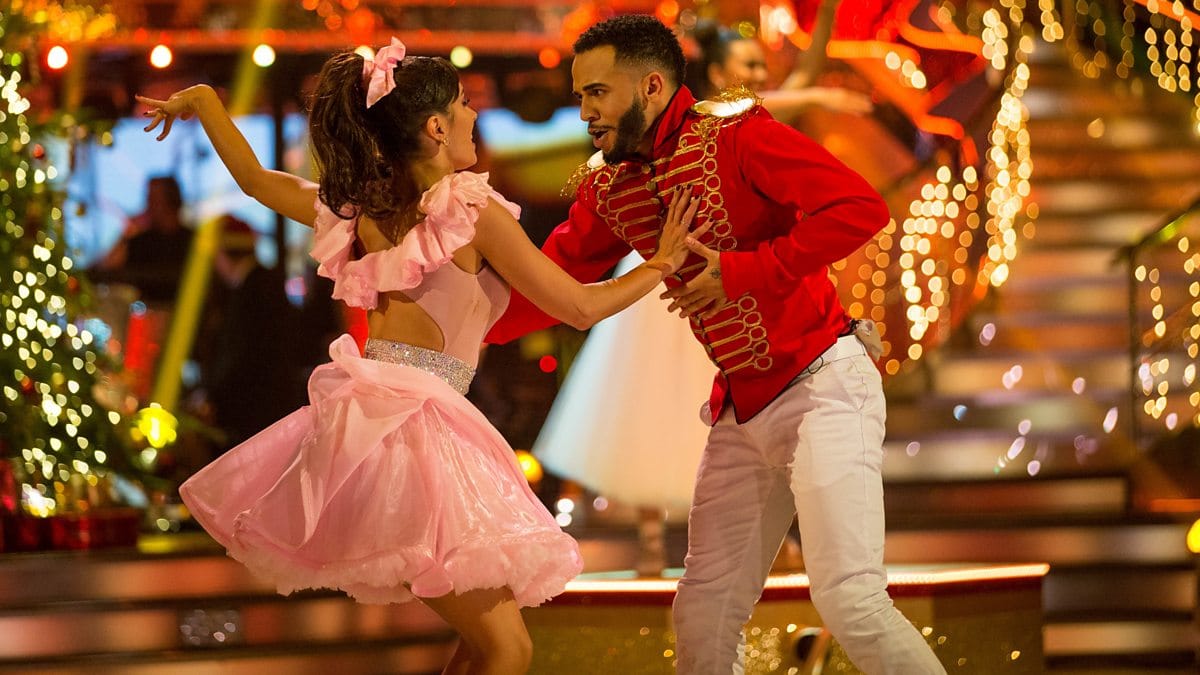 The jive can be traced back in some form to America in the early 30s, the American GIs undoubtedly brought it to Europe during the second world war and it had elements of the Lindy hop and jitterbug in it. It was another dance that caused a scandal as it was considered a bad influence on the young people of the day. It was danced in dance halls across the country when the stationed GIs met the local girls, it’s a lively dance that ideally requires room but in its heyday, it was danced in packed dance halls with large amounts of couples all competing for space.

The jive is fast and energetic and lots of stamina is required. If you asked “how does Ballroom improve Physical fitness?” then I would direct you straight to the jive (maybe the Quickstep too) It is a combination of bounces, flicks, kicks and turns. The posture is completely different from Ballroom, you are on the balls of the feet with the top half of your body poised well forward to allow the legs to move more easily underneath you.  The arms are strong and extended with particular attention to the hands, it literally requires attention to detail from top to toe.

Modern Jive is usually danced to music that has a 4/4 time signature – there are so many fantastic modern songs that suit the jive as well as the classics, again it is really important to get the right music for your dance that has the correct rhythm and style. 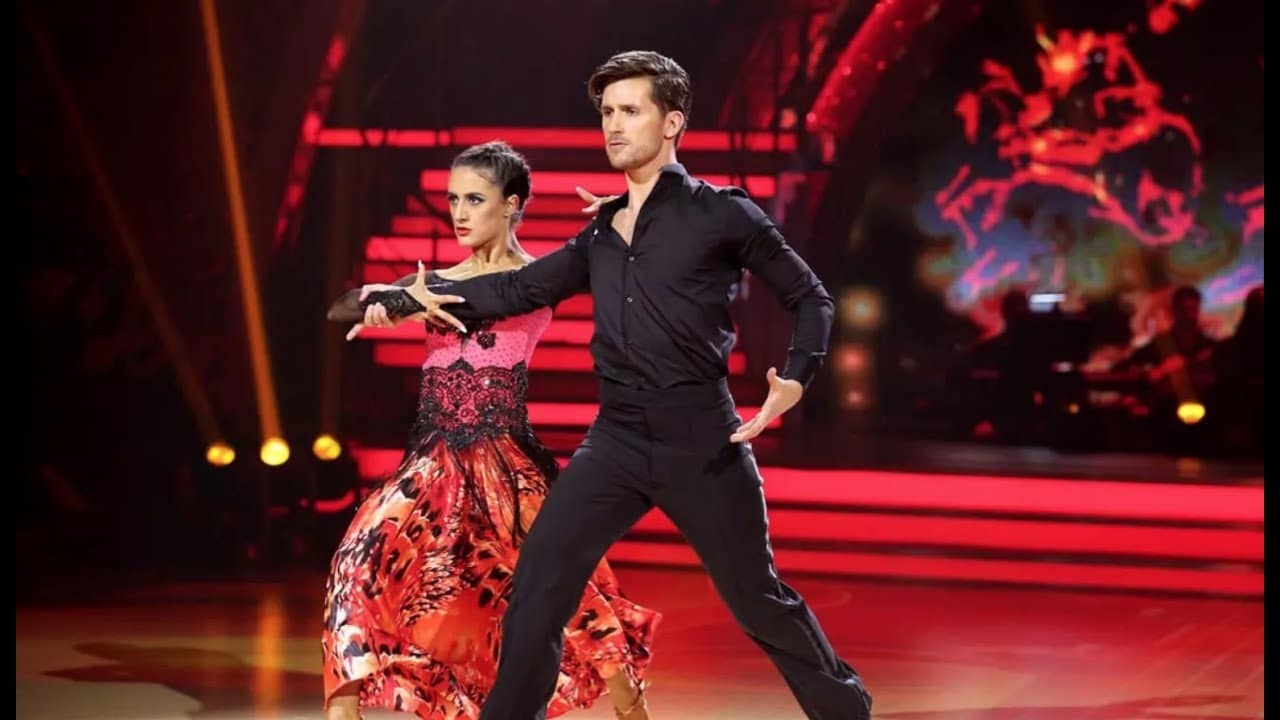 The Paso is one of the most dramatic dances in Latin ballroom. The dance tells the story of the Matador and the cape, usually, the male dancer plays the Matador and the woman the cape but she can also play the Bull and the flamenco dancer. The matador can use a cape to show off his skill in twirling and swirling it around. This dance is all about the drama, it’s intense and exciting telling the story is crucial to a great Paso Doble.

The steps combine the influence of flamenco which beat out the rhythm of the music or the tempo with the heels. The Apel – a stamp of the foot is also a feature. The posture for the Paso is really defined and the key to showing an authentic dance. The hips are tucked under and the arms curved and pulled back to represent the horns of the bull, the steps are strong and into the ground. Costumes add to the drama and the Paso is the only Latin Dance that has a long skirt for the ladies to represent the cape – it is often full and layered and is used as part of the dance. 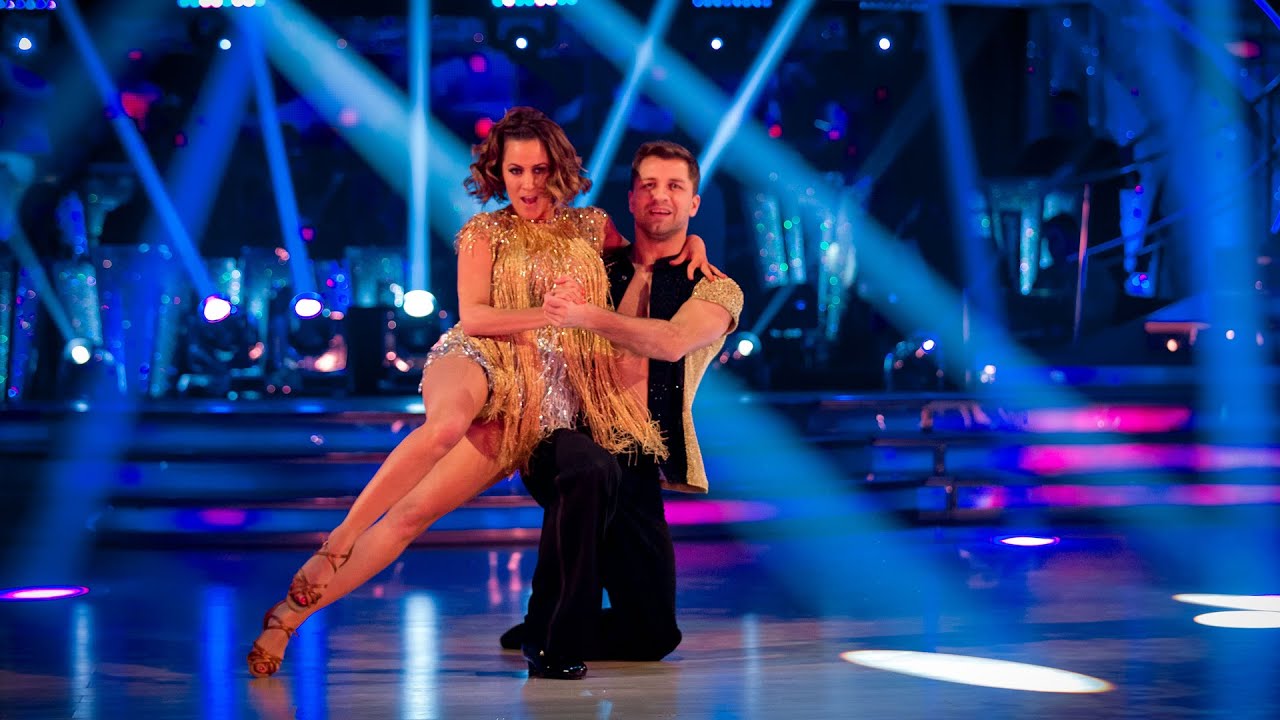 The Cha Cha is fast, Flirtatious and Fun! It originated in Cuba, In the 1950s, an English dance teacher called Pierre Lavell saw dancers performing a triple step to rumba music.  He brought it back to Britain and developed it as a separate dance which went on to become known as the ballroom Cha Cha. It should be danced with energy, cheekiness and lots of hip action.

The steps are danced with a parallel leg but turned out toes which is a point of difference to the other dances. The Cuban break and New Yorker are steps often seen in the Cha Cha Cha (more of that in the upcoming posts). Count your music 1234 and 1 (123 Cha Cha Cha)

Costumes are daring, dazzling and full of sparkle, often frills or fringing are used to accentuate the hips. 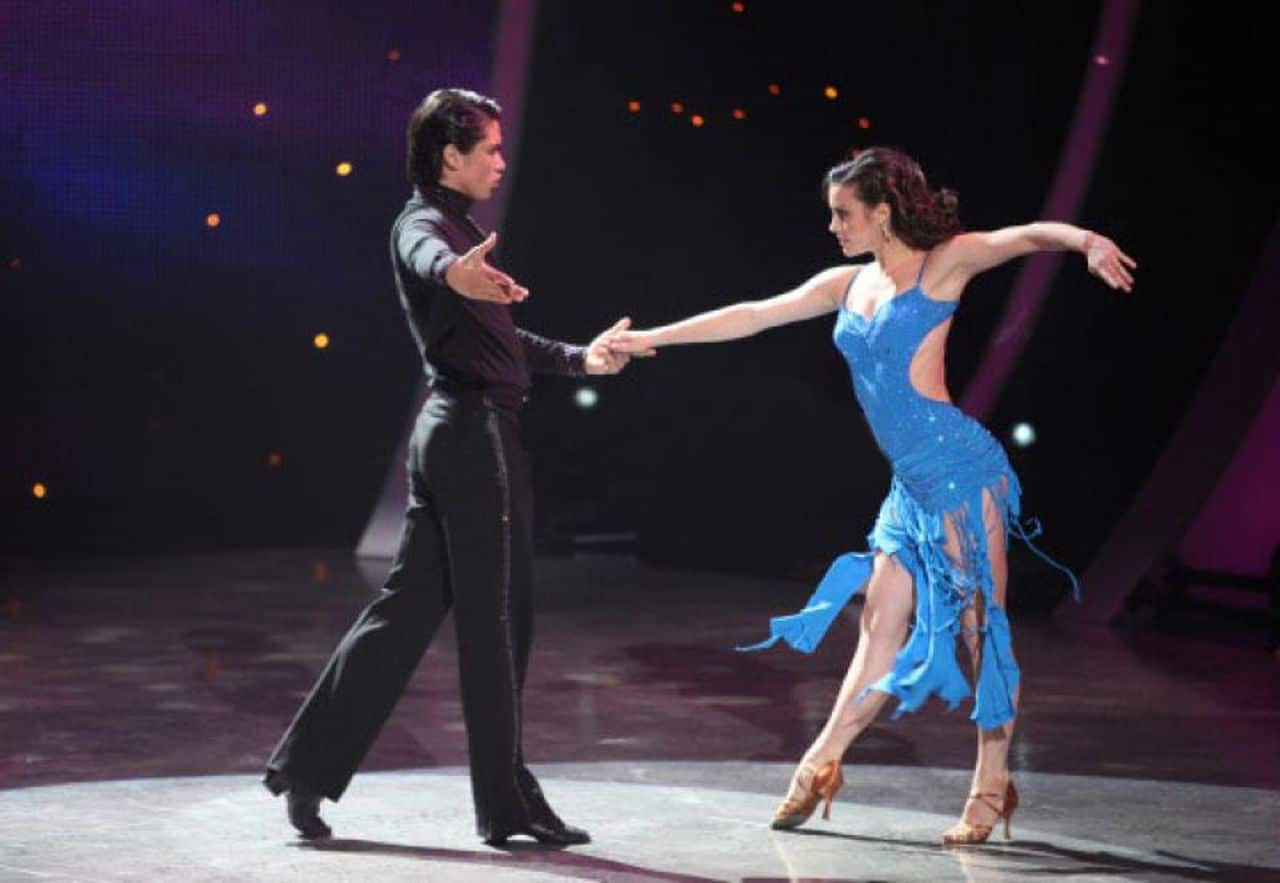 The ballroom Rumba is classified in the Latin section and if you were to ask “what is the slowest ballroom dance?” The Rumba might be it. It is often referred to as the dance of love and the relationship between the two dancers performing it is crucial to its success and its engagement with the audience. When it is done well it draws you into the storytelling.

The Rumba is drawn from a Cuban rhythm, it has a smooth, very subtle use of the hips and walks that fully use the foot through the floor. 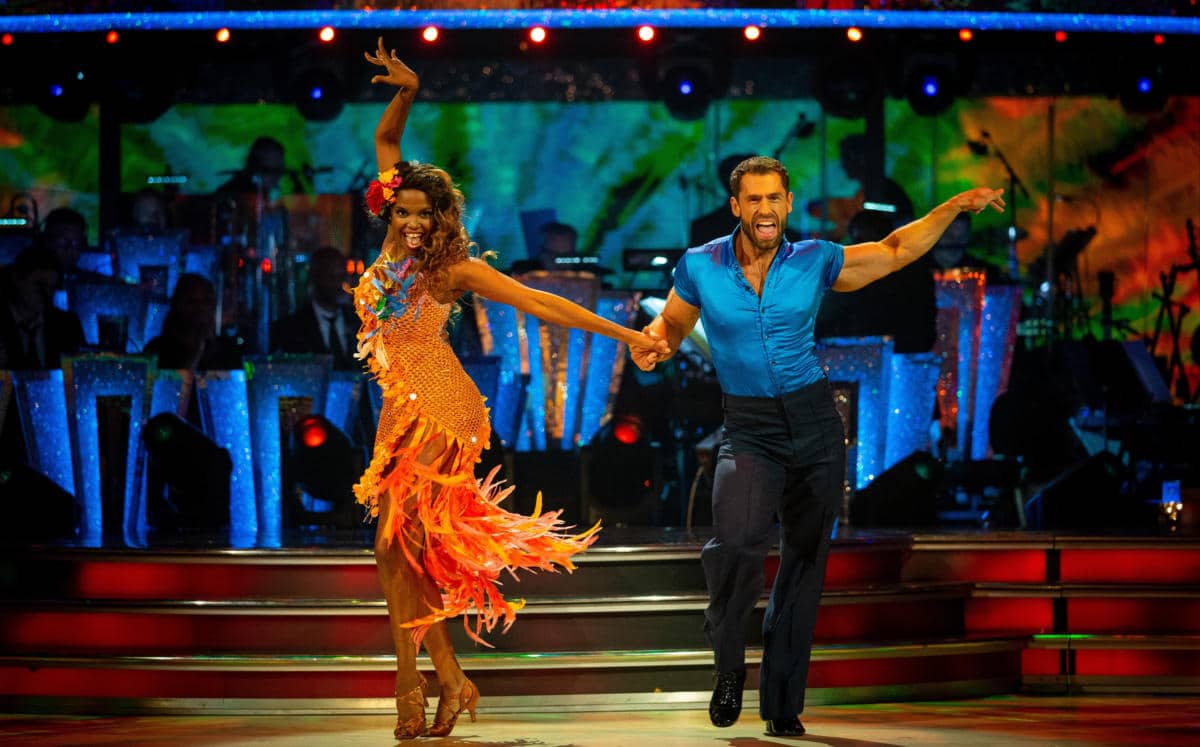 The Latin Samba dance is the party dance. It should have energy and confidence. The origins can be traced back to Africa. Modern day ballroom Samba is a combination of Brazillian music with African steps – this gives us the party style Mardi Gras feeling to the Samba.

The dance itself should have plenty of bounce action, fluid hips and the dancers moving together as one – especially when performing those Samba rolls as you can see in the picture. A flexible body will definitely help in the Samba, use of the back is crucial and adds to the style. The ability to really let go and feel the pulse of the music will make the Samba fun to watch and exciting to dance. Costumes will always pick up on the Mardi Gras feeling in the bright colours, ruffles, feathers and flounces…this dance is Fun, Fun, Fun!

So there you have the Latin Dances. Fast, fiery, intense and so exciting to do. They are very different from the ballroom dances and each has its own personality and flavour.

If you are a Strictly fan then you will be thinking ‘I am sure there are more dances’. There are, the additional dances are not competition dances but are specialist dances added in to create even more variety of style and they are The Charleston, The Argentine Tango, The American Smooth and The Salsa. We will be covering these in future blog posts.

What qualities or Skills might a Ballroom or Latin dancer need?

As with anything in life you will need the desire to learn and the willingness to commit to learning, the ability to listen to your teacher or trainer and being prepared to try hard to master a new skill. Time spent practising the posture, the footwork and the style is essential not just in classes but in your own time too.

Is Ballroom dancing hard to learn?

Any new skill is hard to master but you can do it. Decide you want to learn and be willing to keep trying and you will find a joy in dance that is really like no other. The steps that seem alien at first will become natural and easy, the posture will become second nature. Soon you will be dancing with ease and loving every moment.

Ultra Ballroom is your golden opportunity to learn a new skill that will be with you for life – not only that, you can show your new discovered love of dance off at an amazing event in front of friends and family…take the first step to following your dream.

One thought on “What Are The Different Types of Latin Dances?”